WEST PALM BEACH — The long, legally complex and inarguably sad case of Zelman vs. Zelman is over.

In a settlement inked this month, attorneys representing 87-year-old Martin Zelman, a successful Long Island businessman who slipped into dementia, and his children from his first marriage agreed to pay his wife, Lois, $9.75 million so she would move on with her life without her husband of 15 years. 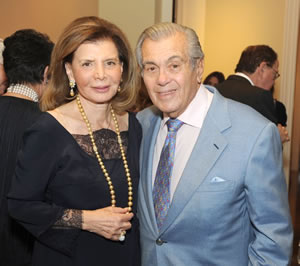 The settlement, which spells out who will get specific art work, furniture and pieces of jewelry and who will get which of their various homes in Palm Beach and New York, reads like a divorce agreement. And, in some sense it is.

Although Lois claims she never wanted to be divorced from Martin, in 2014 the 80-year-old was ordered out of the Palm Beach condominium the couple shared by then-Palm Beach County Circuit Judge Diana Lewis after his adult children claimed Lois was abusing him. While Lewis’ decision was overturned by the 4th District Court of Appeal in September, who said the judge violated Lois’ rights, by then it was too late, said divorce attorney Jeffrey Fisher, who represents Lois.

With Martin’s dementia worsening and having not seen his wife for more than year, he no longer recognizes her, he said.

“Ultimately we were able to obtain for Lois all of the financial benefits Martin wanted her to enjoy so that she can live the rest of her life in the manner that they lived while their marriage was intact,” he said. “The only thing that Lois could not get back was Martin.”

Attorneys who represented Martin’s children, Robert Zelman and Lisa Held, in the litigation that spawned 11 separate legal battles, didn’t return a telephone call for comment. The children, who both live in New York state, will remain guardians of their father as part of the agreement.

But attorney Joel Weissman, who represented Martin in a failed attempt to get divorced from Lois, said the agreement that was hashed out was a fair one. “Neither party was completely satisfied so it must have been an acceptable settlement,” he said.

That was important because under the couple’s pre-nuptial agreement, Lois would get nothing from Martin’s estimated $50 million fortune if they divorced. If he died, she would get roughly $10 million.

The catch, under the pre-nup, was Martin had to file the divorce. If it was done by a guardian, Lois would still get the money. Further, under a little-known Florida divorce law, there is a three-year waiting period in cases where one of the spouses has been declared mentally unfit.

Burton’s decision sent the case back to probate court for further review of Martin’s mental acuity. The appeals court decision went a step further. It ordered a probate judge to reopen the entire case, including who would serve as Martin’s guardians. The reopening of the probate case spurred the settlement.

Fisher said the case underscores the need for older couples to make sure pre-nuptial agreements and other legal documents they draft to protect themselves financially are comprehensive.

“In my family law practice, I am increasingly seeing older clients come into my office who think that, in the final stages of their lives, their money and their planning would provide them with a measure of peace and assurance,” he said. “This case shows that reliance on a well-conceived estate plan may be misplaced.”

Nichole Scott, a Miami estate planning attorney who has watched the case from afar, agreed. She said couples must not only think about what will happen if one of them dies, but what would happen if they became incapacitated. When a lot of money is at stake, such as in the Zelmans’ case, legal agreements must be carefully crafted to deal with a variety of unpleasant, but all too common, possibilities.

Weissman said he addresses “dementia, disability and disassociation” when drafting pre-nups, particularly for couples who are embarking on second or third marriages. While he often broaches the subject with young couples, often they don’t want to think about death, much less other life-altering events.

Still, he said, every pre-nuptial agreement is unique. The Zelmans’ agreement had unusual provisions, he said. But despite it’s specificity, it didn’t contemplate what would happen if either spouse suffered from dementia.

And, ultimately, that opened it up to a protracted legal battle.