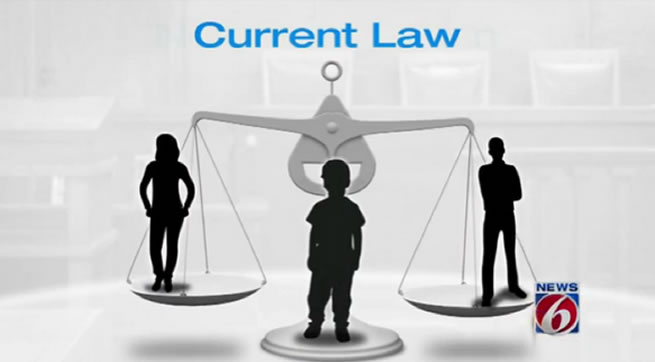 Half of all American children will witness the breakup of their parents' marriage, according to divorce statistics.

Florida law makers are pushing for a new law that would give parents split custody.

It’s a controversial bill that many politicians believe will pass in a matter of time.

We decided to take a close look at this new legislation and find out how it could affect your family.

"I get them all through the week and he has them on the weekends,” said Sheree Kovocs.

Kovocs is going through a divorce and her four children split their time between their mom and dad.

Under current law, a judge considers what’s in the best interests of the child. Traditionally -- that usually means more time spent with the child's mother.

Under new legislation, the judges will automatically rule a child spend his or her time equally between both parents, which is more of a blanket ruling.

"It’s almost like it's a presumption that the best interest of the child is 50/50,” says attorney Sherri Dewitt.

"A lot of parents feel it's not fair to start there for all families because the situation from one family to another can vary significantly," says DeWitt.

Blake Evans says he's been fighting for 50-percent custody of his son and thinks it’s a good thing.

"It's often very hard for fathers who want to be there to be a part of their children’s life," say Evans.

So what if you think one parent should not be entitled to equal time?

You're going to be required to prove the time shouldn't be split 50/50.

For example things like neglect, unable to provide for the child, conviction of first-degree misdemeanors or domestic violence charges-- all could be valid reasons for a judge to shift the balance.

But Dewitt says deviating from the 50/50 won't be easy.

A major concern is children will have to be more involved in the process.

"It may be that more parents will want their children to testify in order to show that there’s a  reason to deviate from it,” says DeWitt.

Psychiatrist Dr. Robert Goldstein thinks 50/50 time sharing can be both positive and negative.

"So in a positive way it’s more inclusive to fathers and it encourages them to be more responsible in their children’s lives," says Goldstein.

On the flip side…

"I think that can be troublesome for kids because it can polarize children one way or another to one parent or another," says Goldstein.

Goldstein says the last thing you want to do is involve your children, which can likely happen under this legislation.

"My concern is that there is so many different things to look at that this will draw children into this process.  This could be tremendously damaging to a kid… forced to be pulled one way or another to make a decision they may not have to make, to feel like they are betraying a parent," says Goldstein.

As for Sheree and her children, "I’m not opposed to it I’m opposed to it just being across the line.  I know the kids shouldn't be involved in the actual say of who gets majority custody but if it boils down to that thenI think maybe they should have a say," says Kovacs.